As the world faces the devastating consequences of the Covid-19 pandemic, tourism is among the sectors affected the most severely. A major source of revenue and jobs in Asia, it started to feel the pain early when the Chinese outbound market collapsed almost overnight in late January.

After months of lockdowns, countries are cautiously starting to ease travel restrictions, starting with domestic tourism. Vietnam, praised worldwide for its timely and aggressive response to the virus, was among the first to start encouraging its citizens to travel again.

Now, Vietnam and others hailed as standard bearers for virus containment the first time around, including Australia and Hong Kong, are battling a second wave. Japan — also praised for keeping case numbers low without a lockdown or even any legal means to force businesses to close — is facing a formidable resurgence, with daily cases hitting records day after day.

In Vietnam, nearly 350 cases and 10 deaths were reported in the three weeks to last Friday, after months of no fatalities and just over 400 cases overall. The spread is clustered in the coastal tourism hub of Danang, and the strain appears more transmissible than previous versions, health authorities say.

“Such cases have led to the extension of international travel restrictions and destination lockdowns, which ultimately has hampered the recovery of the sector, leaving jobs and economies under threat,” said Lim Boon Kwee, chief operating officer of the Bangkok-based hospitality chain Dusit International Plc.

The group’s property portfolio is spread across 13 countries: Bhutan, China, Egypt, Indonesia, Japan, the Maldives, the Philippines, Qatar, Sri Lanka, Thailand, the UAE, the US and Vietnam. Of these, only Dubai and the Maldives are currently open to international visitors. As such, the majority of Dusit’s destinations are seeking to recover by focusing on stimulating domestic tourism.

“The sudden emergence of such cases highlights the unpredictable nature of the virus and why it’s difficult to anticipate how a tourism recovery will take place,” Mr Lim told Asia Focus.

“The daily deluge of online information — some factual, some fake — also makes the situation confusing and difficult to analyse.”

That said, restrictions on travel will depress tourism and hospitality revenue in the short and medium term, he said. “Until international borders reopen, everyone in our sector will be doing our utmost to encourage more domestic trips and also entice more domestic spending.”

Willem Niemeijer, CEO of Bangkok-based Yaana Ventures, said that even before Covid, there were some Thai destinations that clearly appealed more to domestic travellers, among them Bang Saen, Khao Yai and Loei. Others appeal more to international travellers, such as Phuket and Koh Samui. “Naturally the offers in terms of accommodation are adjusted to those tastes and budgets,” he explained.

The impact of the crisis on disposable incomes, he added, further undermines the idea that domestic travel can seriously support the sector, given the huge investments made in past decades.

“This is a devastating blow for normal tourism. The only revenues in tourism are in the domestic market, the volume of which is directly linked to the nation’s level of development,” he told Asia Focus. 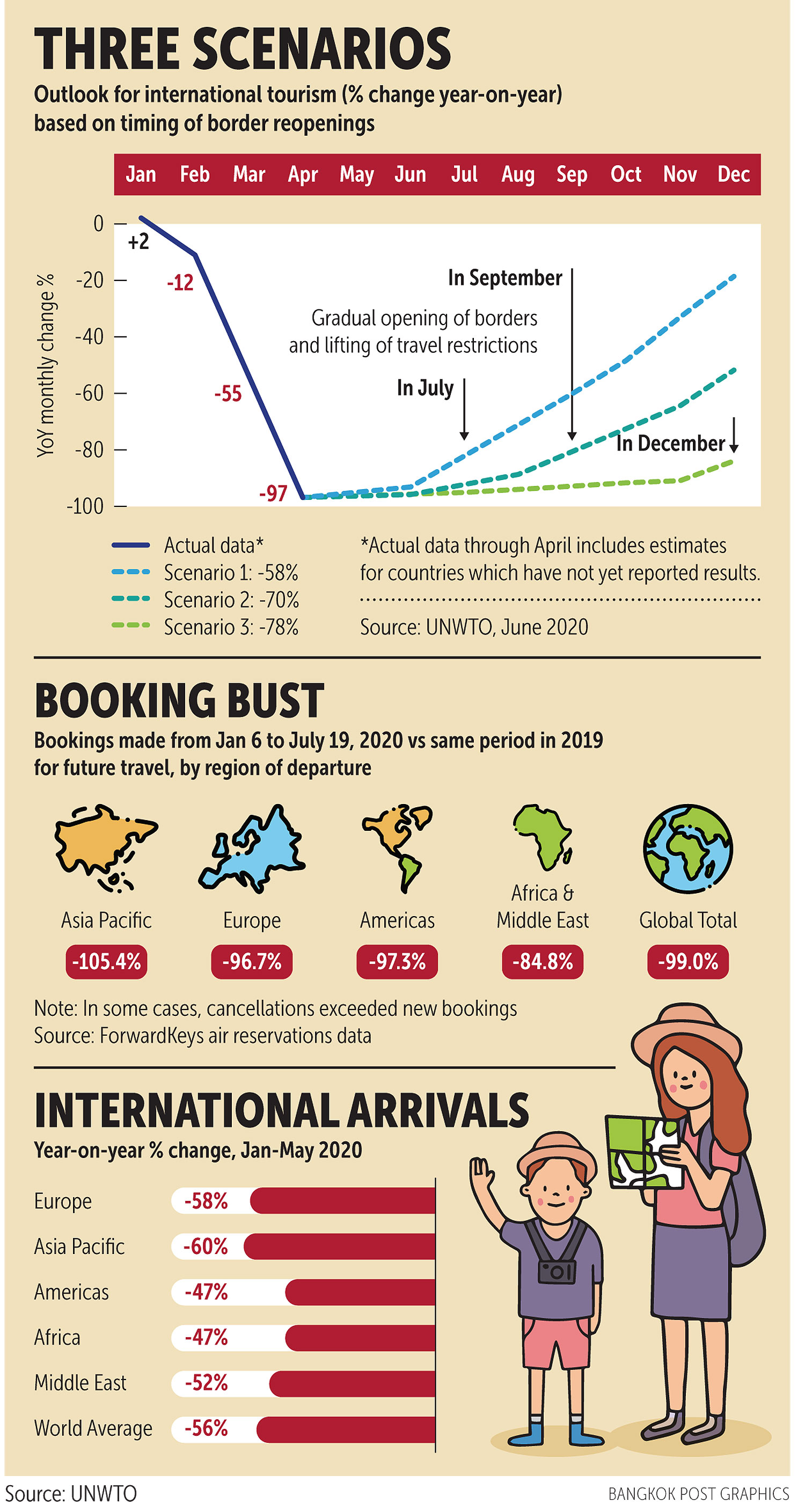 “Most domestic markets seem to avoid domestic flights in favour of cars, limiting the radius of travellers from hubs such as Bangkok, Ho Chi Minh City and Hanoi. With Thailand as an example, few travellers will end up on the southern islands or in the North,” he said.

The United Nations’ World Tourism Organization (UNWTO) in May released multiple scenarios for this year, saying international tourist arrivals may drop by between 58% and 78% by year-end, depending on when governments reopen borders. That would translate into a loss of 850 million to 1.1 billion international tourists globally, putting between 100 million and 120 million jobs at risk.

As of the end of May, the pandemic had already led to US$320 billion in lost revenues, already three times the cost of the 2008-09 global financial crisis.

The hotel data provider STR, meanwhile, said the occupancy rate in Asia Pacific in May was down 47.3% from the same month a year earlier. Revenue per available room stood at $20.04, down 68.5%.

In Japan, the “Go To Travel” campaign since June 22 has offered subsidies covering half of eligible domestic travel expenses, up to ¥20,000 ($187) per night. But Tokyo was cut from the programme after a resurgence of the virus there, a move that has reverberated through the travel industry.