An Asia-Pacific Economic Cooperation 2022 sign on the Queen Sirikit National Convention Center in Bangkok, where the Apec summit is scheduled to be held. Bloomberg

Established in 1989, Apec is a regional economic forum with 21 member economies across the Asia-Paciﬁc region, a grouping bigger than Asean, the Regional Comprehensive Economic Partnership (RCEP), and the Comprehensive and Progressive Agreement for Trans-Pacific Partnership. The Apec bloc makes up about 60% of global GDP and 47% of world trade volume.

The gathering returns to an in-person event for the first time since 2018, with the 2019 event in Chile cancelled because of protests in the country and the last two editions held virtually due to the Covid-19 pandemic.

Prime Minister Prayut Chan-o-cha has stressed the significance of Apec 2022, saying the event is an important step for Thailand to be accepted by more countries and allowing the nation to benefit from investments and tourism.

All 21 Apec member countries confirmed they will attend the summit in Bangkok on Nov 18-19, Foreign Affairs Minister Don Pramudwinai said on Nov 4.

Nevertheless, questions linger about how Thais and businesses will benefit from the meeting. 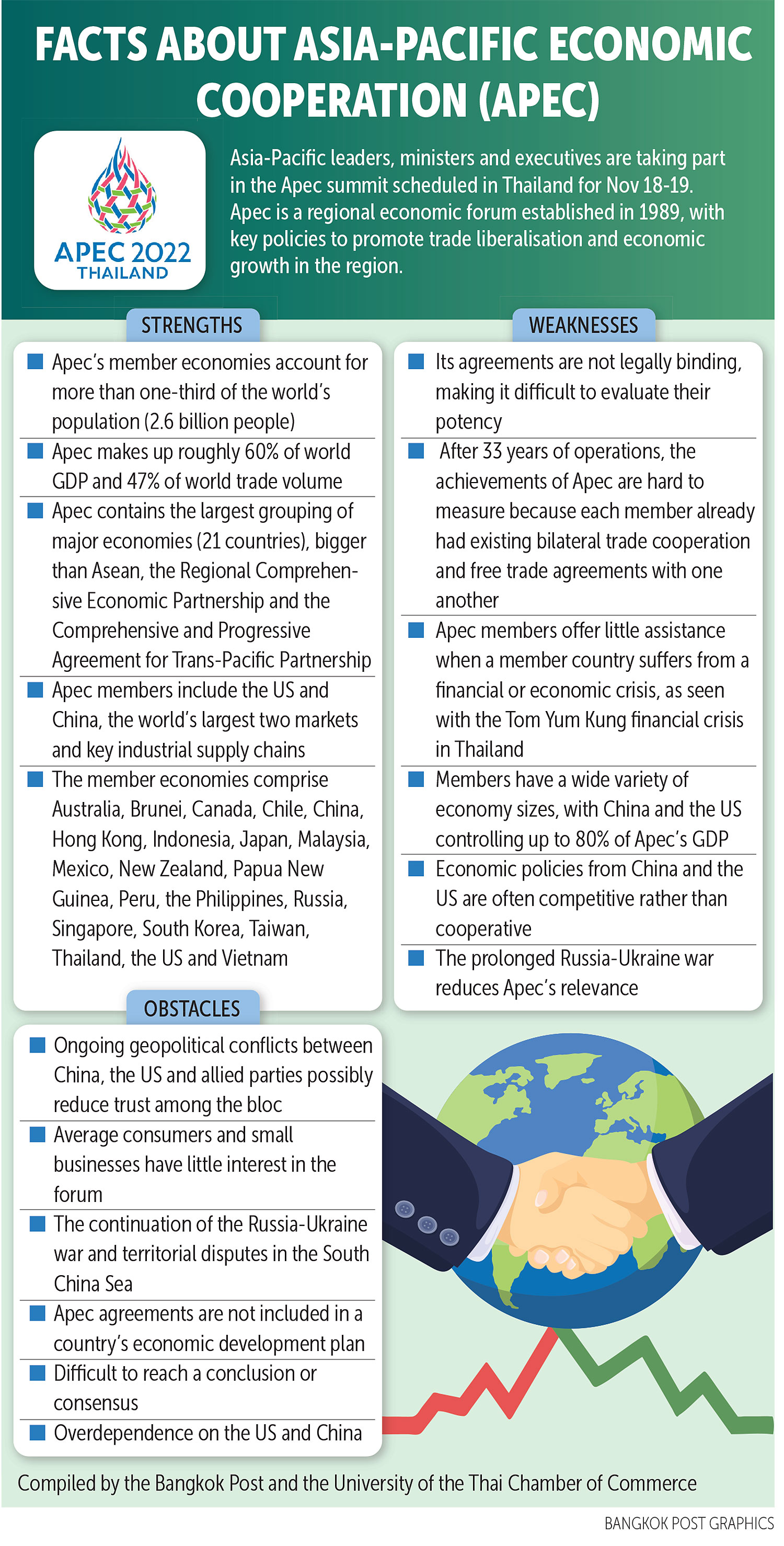 Aat Pisanwanich, director of the Center for International Trade Studies at the University of the Thai Chamber of Commerce, said this week’s Apec forum would offer Thailand a chance to present and exchange information about economic conditions and best practices in handling difficulties in each of the bloc’s countries. The event is also likely to increase opportunities for Thailand to sell and export products, as well as draw investment from member nations.

The event also offers Thailand a public relations opportunity to promote itself in various ways, notably Thai agricultural and industrial products under the bio-, circular and green (BCG) development model, he said.

“But we should not expect too much from this year’s Apec forum as there are escalating geopolitical conflicts and a burgeoning economic slowdown,” Mr Aat said.

“Many Thais and entrepreneurs are paying little attention to the summit because they are focused on the country’s economic difficulties and higher costs of living.”

Certain members proposed a free-trade agreement (FTA) within the bloc earlier, but there has not been any progress, leading many members to pursue their own FTAs such as RCEP.

“Thailand benefits from the public relations aspect and anticipated trade and investment expansion, as the forum will be used to invite private entrepreneurs from 21 economic zones to ramp up their investment here,” said Mr Somjai.

“More than 100 Apec-related meetings are scheduled during the summit with the private sector, including business-matching activities. The Thai private sector is expected to solicit joint investments with potential foreign partners in the government’s flagship Eastern Economic Corridor.”

However, the veteran economist warned that given the ongoing conflicts between powerful members, a joint Apec declaration is unlikely to be issued. 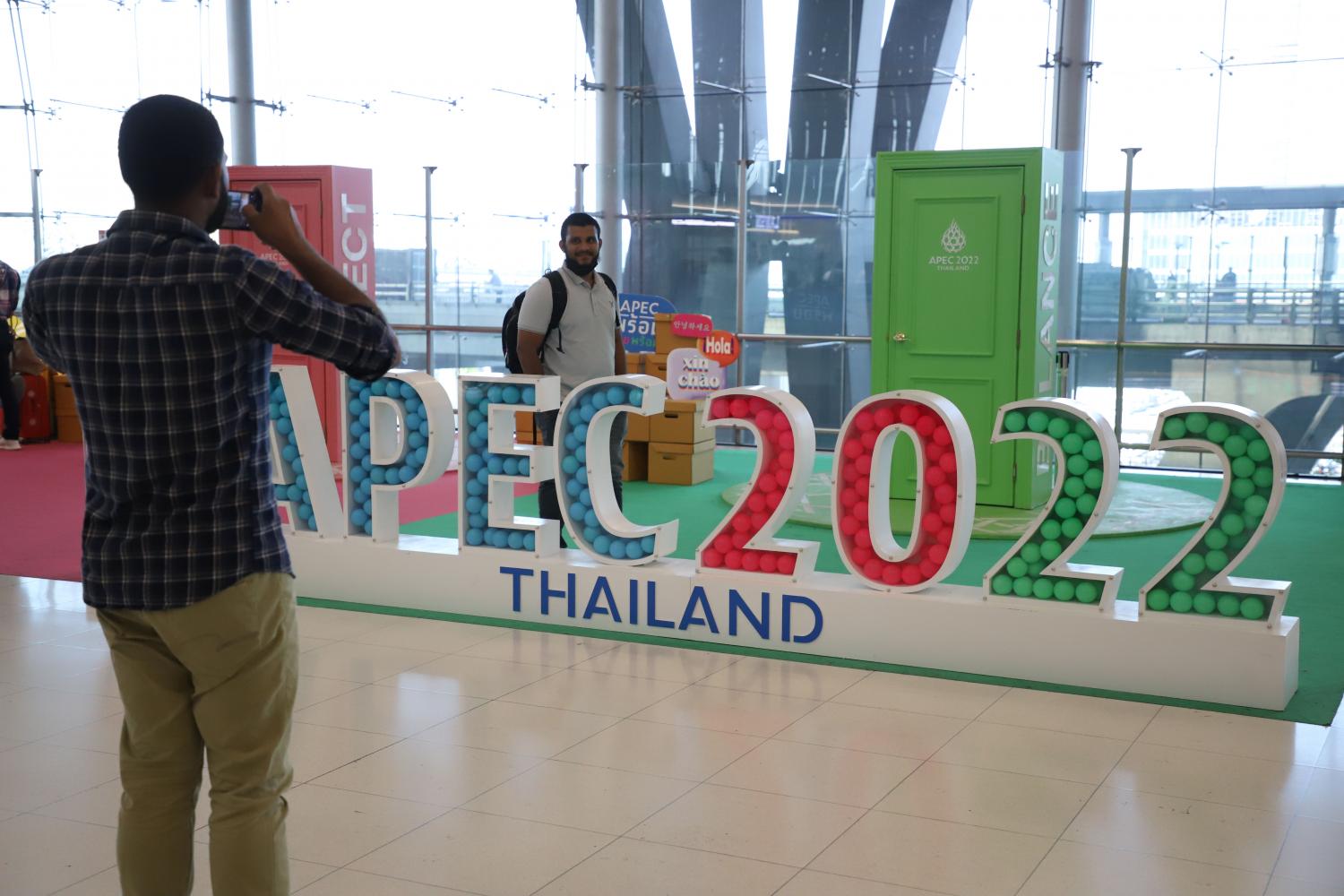 Tourists take photos with a sign for the Apec 2022 summit at Suvarnabhumi airport.  Varuth Hirunyatheb

Sanan Angubolkul, chairman of the Thai Chamber of Commerce, said the Apec 2022 forum is considered vital to bloc members because it is the first in-person meeting in four years as a result of the pandemic, which adversely affected the world’s public health, economy and tourism.

“The main goals of the forum are to: promote free trade and investment; encourage social cooperation and development in all dimensions; boost agricultural cooperation; promote the role of women in the economy; reduce natural disaster risks; and enhance public health development,” said Mr Sanan.

“In addition, the forum opens up more opportunities in trade, investment and tourism for Thai entrepreneurs and citizens.”

With Thailand the host this year, the meeting provides opportunities for the country to forge stronger economic links with other nations, he said.

“The Apec forum is a gathering where the world’s leaders and CEOs exchange their perspectives and participate in driving the bloc’s trade and economic development, aiming to find a consensus in tackling key trade and business challenges that Asia-Pacific and the world are confronting,” Mr Sanan said.

The participation of international business leaders will result in more money circulating in the Thai economy, helping to propel the country’s economic recovery, he said.

According to Mr Sanan, a key area the government and private sectors agree on is BCG economic development.

A bio-economy is expected to help upgrade and create value for agricultural products and herbs using high technology, while a circular economy reduces waste and encourages the reuse and recycling of resources.

A green economy is intended to reduce environmental risks and ecological scarcities, aiming for sustainable development without degrading the environment.

BCG economic development is closely related to ecological economics, but has a more politically applied focus that should be good for Thailand’s tourism sector, he said.

Closer cooperation among the government, businesses and the public is desperately needed, while the younger generation is fully equipped with the creative power, knowledge and talent to participate in Thailand’s efforts to upgrade its competitiveness, he said.

The Apec summit is a great opportunity for Thailand to showcase itself and gather ideas from key businesspeople across Asia-Pacific to jointly deal with regional economic challenges, said the Federation of Thai Industries (FTI).

“This is a time to thoroughly introduce our country to Apec leaders,” said Kriengkrai Thiennukul, chairman of the FTI.

Workers hang a banner for the Apec Summit 2022 at the Queen Sirikit National Convention Center in Bangkok.  REUTERS

Thai authorities and businesspeople can propose various topics for discussion, ranging from trade and investment to tourism, so participants can have a deeper understanding of post-pandemic Thailand, he said.

The country was hit by Covid-19 in early 2020 and saw its economy retrench because of the impact of lockdown measures.

After the easing of the pandemic and the reopening of the country late last year, the Thai economy is seen by some as in recovery.

The Apec summit will highlight efforts to solve economic problems, including issues related to the pandemic and the Russia-Ukraine war, said Mr Kriengkrai.

“Businesspeople will talk in side meetings — the Apec CEO Summit and the Apec Business Advisory Council meeting — to push ahead with solutions to inflation, energy, food security and climate change,” he said.

The recommendations were reported to the Thai prime minister last month.

One of them is a push for the long-delayed Free Trade Area of the Asia-Pacific, but this recommendation will take time before it can be translated into action, he said.

A mini-FTA can boost Thailand’s trade and investment faster than a traditional FTA because it focuses on a trade agreement between two cities or provinces. 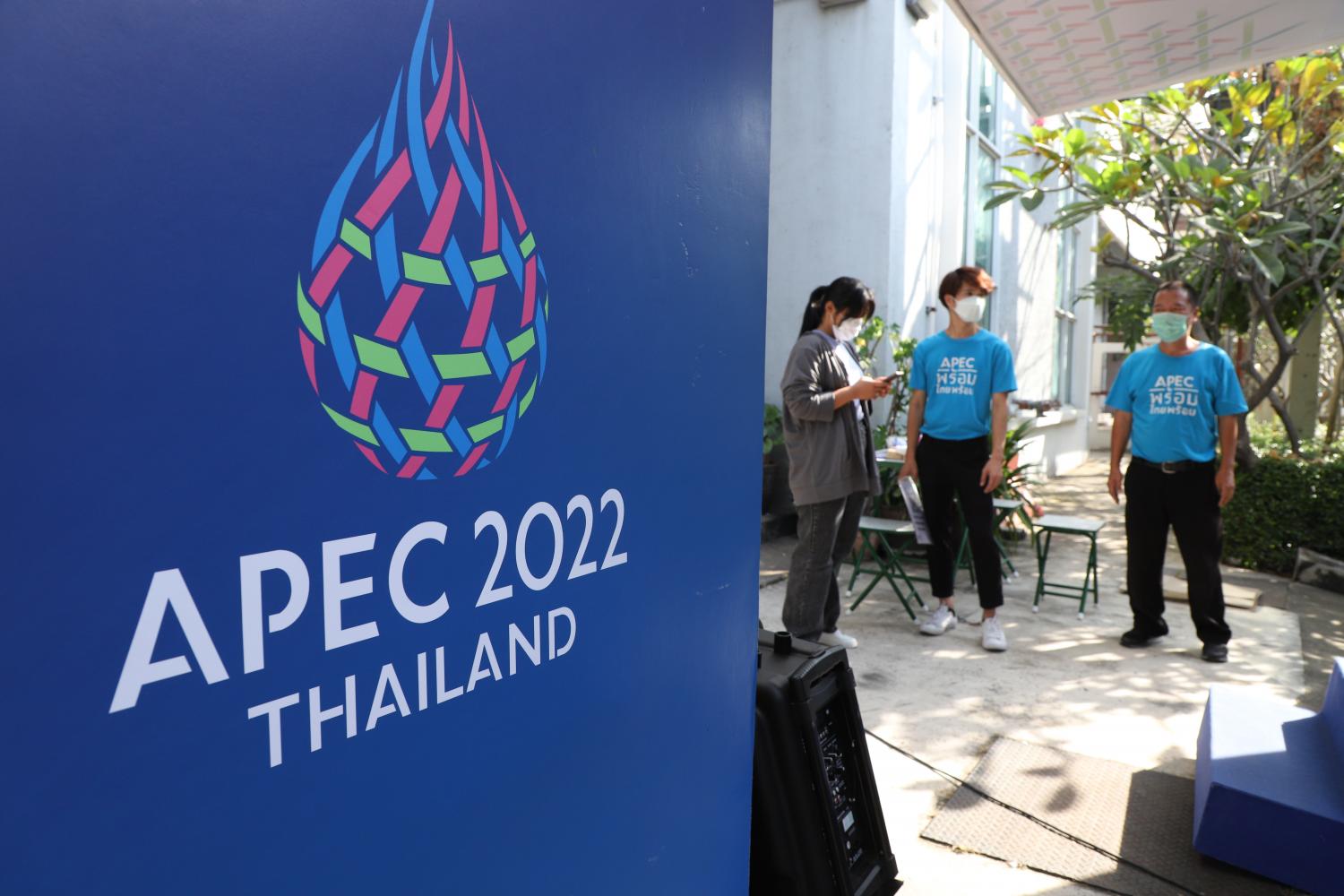 Marisa Sukosol Nunbhakdi, president of the Thai Hotels Association, said sustainable tourism should be on the agenda during the discussions.

Mrs Marisa said given that regenerative tourism is a new trend, Thailand should prepare to latch on to this wave. This includes improving destination management to reduce environmental impacts through collaboration between all stakeholders — the public sector, private sector and consumers, she said.

In addition, carbon-neutral targets could be achieved through activities such as growing trees or coral reefs to offset the effects of tourism.

One of the best strategies would be to create and promote new destinations that are entirely sustainable, Mrs Marisa said.

For the Thai hotel industry, she said the sustainable trend has started to dominate operational policies. However, it will take time for all properties adopt this trend, said Mrs Marisa.

“Sustainability has become a baseline for hotels, and Thailand is the leader for green hotels among Asean countries,” she said.

Roughly 600-700 Thai hotels have received green certification from the Green Leaf Foundation and the Natural Resources and Environment Ministry.

Another step forward would be if Asean nations had a dialogue about adopting a single visa, similar to the Schengen system in the EU, said Mrs Marisa.

This would offer convenience for long-stay visitors and long-haul travellers who want to visit multiple destinations in the region.

She said to increase tourism value, Apec members could achieve this goal together by promoting wellness and medical tourism as well as the meetings, incentives, conventions and exhibitions segment.

Mrs Marisa said she hopes Apec members promote travel between their countries by encouraging tourists to take trips to local communities that have a low impact on the environment.

She said the government should use the Apec summit to seek opportunities to bring more tourists from countries that remain closed, particularly from China.